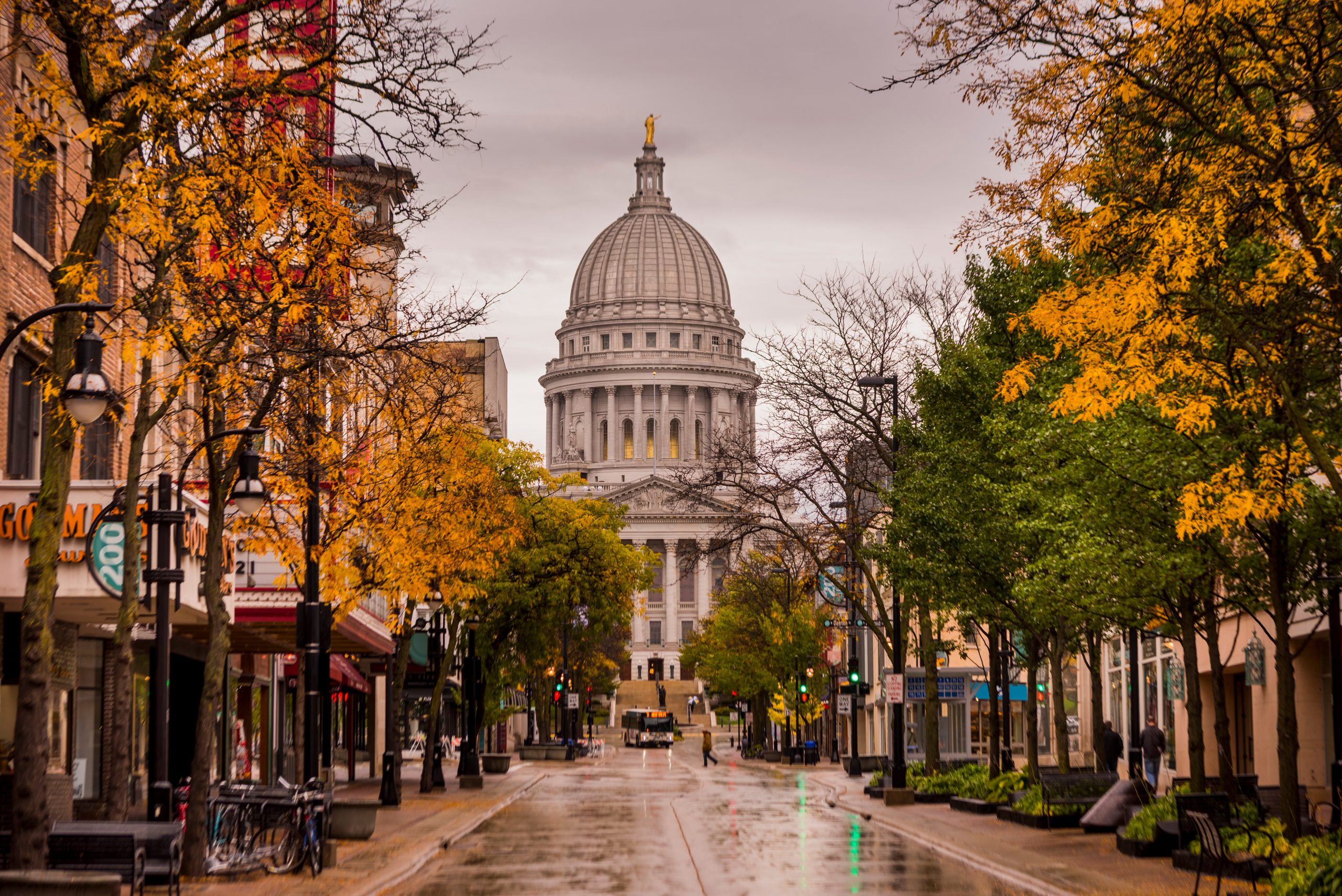 Madison, the capital of Wisconsin, has proved to be one of the fastest-growing cities in Wisconsin.

But with variations in statistics as diverse as the city itself, how can one even begin to attempt comprehensive moving and cost of living calculations?

While a complex variety of factors, such as the number of people in your household, location, and lifestyle preferences play a role to determine average expenditures – it’s all under control.

The basic bigger picture breakdown for the overall Madison Wisconsin cost of living is categorized and calculated as follows.

Housing is not only one of our main monthly expenses, but it’s also a top reason for relocation for many people. The home is after all, where the heart is, and rightfully should be.

The average rental cost in Madison is estimated at just over $1,100 per month, and the average cost of a family home is $246,300, according to the World Population Review. However, this is the average for the entire city and doesn’t account for the neighborhood or living space.

Homeownership or rental in Madison is an estimated 8% to 13% higher than the national average cost. But don’t despair, there’s some good news ahead – even if you can only afford a glimpse of architect Frank Lloyd Wright’s masterpieces.

Let’s have a look at Cottage Grove.

Cottage Grove, a suburb of Madison, has been rated as one of the best places to live in Wisconsin. It’s a highly sought-after neighborhood for young professionals and families, especially with safety in mind.

It has a dense suburban feel with lots of parks and highly rated public schools.

While the housing cost in Cottage Grove is estimated to be up to 26% higher than the national average, the average household income is marginally more. It all seems to be adding up to a rather fair exchange, don’t you think?

Extra expenses such as deposits, property transfer fees and taxes, maintenance, and upgrades may all vary by metropolitan area. Since the assessment procedures are complex and dependant on a variety of factors, local tax rates cannot be calculated accurately in advance.

We would advise you to keep a minimum of 10% above the national average in mind to stay on the safe side but can assure you that it is well worth it.

Good-quality fresh produce should always be a priority in planning for the future. As a current estimate, you can expect to pay in the range of $3 – $4 for a gallon of milk, and anywhere between $1.80 and $7.40 for a loaf of bread online.

There’s also a wide variety of weekly farmer’s markets to choose from. Apart from farm-fresh quality, the more direct delivery naturally comes at a lower cost than in-store shopping.

Food Festivals include the Taste of Madison, Yum Yum Fest, and Restaurant Week amongst dozens of pop-up events. Apart from the celebrated selections of cheese, Madison is also known for its craft beverages that you can explore at events such as the Great Taste of the Midwest, Craft Beer Week, and the Isthmus Beer & Cheese Festival.

Frequent restaurant visits will add to overall food expenditures, so we would advise you to incorporate an initial increase in food expenditures for your first few Madisonian months, or at least until the kitchen is fully stocked and unboxed.

Thereafter, no more than 5% should be perfectly appetizing. And foraging at a farmer’s market – formidable.

Transportation is a routine additional expense if not working from home or living within walking distance to amenities. Luckily, Madison has one of the nation’s best public transit systems.

The City of Madison Metro Transit offers free transport services on certain routes on campus, while monthly passes range from $28 to $65 per Mad City adult – and less for the elderly and people with disabilities. Children under 5 can travel with a chaperone at no extra cost.

While the convenience of owning a car is next to none, comfort does come at a cost. Madison has the highest vehicle registration fee in Wisconsin including the city and Dane County Tax fee.

Maintenance, repairs, gas tolls, and parking all add up after an estimated 23.88-minute commute in traffic.

However, car insurance rates in Madison are lower than both the national and Wisconsin average at an estimated $1,150 per year.

For those that still need to commute to work in traffic regularly, maybe consider a solution of sharing and carpooling. Not only will this cut your gas bill substantially, but it also cares for the remarkably clear Madisonian atmosphere.

Electricity costs have gone down by just over 5% in the last year. As much as this is excellent news, fluctuation is inevitable and advancements in alternative energy solutions such as solar, welcome for both budgetary and environmental concerns.

Reliable infant, toddler, and childcare is invaluable, but on average rather unaffordable. It’s not just some sort of Madisonian myth.

The White House announced that Wisconsin is to receive millions in childcare aid from the American Rescue Plan Funding to help existing facilities and developments.

We have high hopes that this will have a positive impact in creating an improved system for all involved, but especially for the future of generations ahead.

According to World Population Review, the average childcare cost per annum in Wisconsin is around $12,500 (2021), with Madison at a slightly higher rate than rural areas. But it depends on the child’s age and institution, ranging up to double the estimate in some cases.

While the current cost of infant care may be more than that of an undergraduate college student, some employers, colleges, and universities provide daycare centers at reduced costs. In turn, this may save both time and travel costs, until systems are more cost-effective from the core.

The School Debate – Public versus Private:

Wisconsin is one of the states where private schools are more affordable than public schools (it’s all about the funding if you’re wondering). The average cost per annum is one of Madison’s 42 private schools, however, is considerably higher at about $7,200, in comparison to the $4,500 average in Wisconsin.

The University of Wisconsin has been ranked 13th among public institutions in 2020. While higher education does indeed come at a higher cost, taking the bus instead of staying on campus may greatly reduce costs.

While average entertainment costs per household in the U.S. may range anywhere between 5 and 15% of total expenditures, this is an area where there is no need for concern.

With a variety of outdoor activities throughout the year, you might as well skip both the gym and phone contract in favor of some real quality earth and air time.

Madison offers an extensive bike trail network, summer sailing on lakes, and a staggering number of steps to be taken in any of its 270 parks. Outdoor winter activities include skating, hockey, skiing, and ice fishing.

For some serious escapism, movie tickets per adult could be negotiated from $8.50 to $16.50 depending on the theatre and release.

There’s also a bustling theatre scene where you can catch a production of Fiddler on the Roof for anywhere between $30 and $130, depending on the seats and the time of the show. Of course, there’s plenty of other shows on offer, so keep your eyes open for whatever the local theatre troupe puts on next.

The air quality in Madison is rated as excellent.

Whether better breathing or the variety in outdoor activities throughout the year adds to an overall healthier lifestyle, you can still rely on world-class healthcare at competitive capital rates if needed.

It is always more efficient to make healthy investments from the start, but health insurance is a must for worst-case scenarios.

Madisonians set aside up to 24% extra for healthcare costs in comparison to the national average. Our health is the greatest and most priceless gift. And they know it.

So be responsible. Be balanced. Be healthy. And be happy. This is the most efficient healthcare plan of all.

Insurance costs are another field that cannot be pre-determined accurately due to variations in cost factors, but it’s generally on par with the national average.

While most households in the U.S spend an estimated 8.9 – 14% of their budget on personal insurance and pension, there is no need to be concerned about setting extra money aside when moving to Madison. Car insurance for one, as mentioned, is less in Madison.

Cost of Living: A General Overview

2021 reflected an annual overall increase of 1.3% with the housing, food, and transportation sectors at the top of the inflation list.

Housing and food are an ongoing necessity, but long-term shifts in transportation as a result of lifestyle changes would be most likely, as unpredictable as the journey ahead may be.

The overall economical picture of Madison is still one of stability and growth.

The lower unemployment to higher average income rate in comparison to the national average bodes well, while the higher rate of education and budding tech industry paves the way to sure and steady progress.

While we realize that it’s just not possible to speculate and narrow down the cost of living according to someone else’s norm, it’s still possible to make approximate guesses:

As much as these are great generalized indications, more specified calculations offer more control, and therefore more security. Let’s move on to our next Madisonian Maths Mission.

How to calculate your personalized cost of Living for Madison, Wisconsin, in four straightforward steps.

To maintain your current lifestyle,

While the average cost of living is slightly higher (~7%) than the national average, we have more than enough reasons to be mad about Madison.

And we’re not the only ones. Madison has been rated the second most liveable city in Wisconsin.

Whatever your reason may be for moving to this diverse city, we’re here to help in every possible way that we can.